Zakaria Almoutlak has had plenty different jobs in his life. He is an artist sculptor, but he also worked in antics trading, marketing, the media… Today, he even taught a class of twenty students at the communication school IHECS. But he is not exactly a normal teacher. Firstly, because teaching is not his usual job, but also because Zakaria was born in Syria. He had to flee far away from his country, his family, his home. And on the 15th February 2016, Zakaria arrived in Belgium to ask the status of refugee.

Refugee… Seven letters, three syllables and a whole bunch of images and stereotypes associated to it. Zakaria tries to fight these stereotypes every day. As he so rightly told me “I didn’t choose to be a refugee. No one does. We all had normal lives before; a family, a job… People need to remember that”. That’s why today he gave a class to twenty students about the Syrian conflict.

“It was the first time I taught. The students were very nice. It is a great experience. It makes me feel useful and it’s important for me to tell the reality of my country.”

Zakaria gave, for one week, a lecture to first year Master students in socio-cultural mediation about the history of his country but also his personal experiences of the conflict. “It’s important that they learn about the history of Syria because the historic background explains the current situation but also because in the future they might work with Syrian refugees and they need to have a knowledge of what happened there.”

Zakaria feels that everything he can teach about his country’s history will somehow have an impact on Syria. He hopes that the students will become themselves ambassadors and tell what they learned to the people around them. “I also hope that thanks to this project they won’t be afraid anymore to go and talk to refugees. I hope that people will realize refugees are not something they should be afraid of”.

When asked about the current tensed political climate surrounding immigration in Belgium, the guest-teacher answers that there isn’t much to do about it, except reminding people to be human.

Since he arrived in Belgium, Zakaria has done several volunteering works to get acquainted with locals. Lately, some of his sculptures were shown in an exhibition about the Arab spring. Today, he stood in front of a class to share his story and remind us all that

“people don’t choose to be refugees, but they can chose to be humans and treat others like such, no matter their backgrounds. We are human beings before being refugees.” 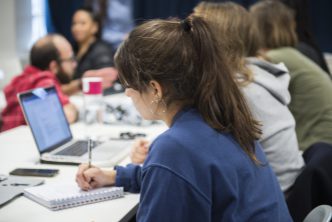 Can I resume my life? 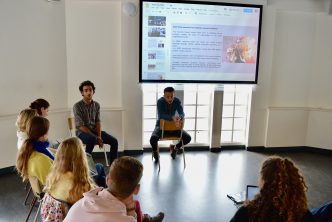 This site uses Akismet to reduce spam. Learn how your comment data is processed.

coLAB is a project funded by the European Union/Council of Europe Joint Programme Democratic and Inclusive School Culture in Operation (DISCO). Launched in May 2013, the programme provides financial support for projects within the field of education for democratic citizenship and human rights education.

European project to promote mutual understanding between local communities & refugees, inclusive practices in universities, and to integrate refugees as experts

"Projects like the ones developped under DISCO are not only interesting but necessary" introduction speech from Ivar Staffa, this morning #education @coe @coLAB_DISCO

Written by Brussels
1 comment
Can I resume my life?
FacebookTwitterRedditEmailLinkedInWhatsApp
Feras Abo Dabboseh : “We are all human beings, born in different places, living in different contexts”